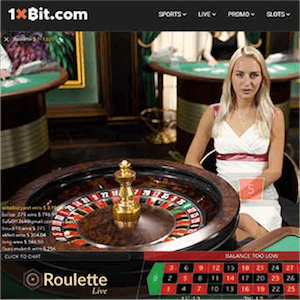 Cryptocurrency has just gone super-exclusive thanks to one of the largest cryptocurrency casinos currently in operation. 1xBit, thanks to having partnered up with the leaders in Live Dealer technology, Evolution Gaming, has just launched its first 100% dedicated branded games table.

1xBit’s Live Blackjack table is no keeper of hours, and players are able to join in on the fun 24 hours a day, 7 days a week. But it’s the social element of it all that really sweetens the deal. Players are also able to interact with other online players seated at this very special Blackjack table.

Thanks to Live Dealer specialists Evolution Gaming having opted in on the deal, a great deal of credibility has been established in favour of 1xBit; referring of course exclusively to the cryptocurrency market.

And speaking of true industry-pioneers, 1xBit was one of the very first online casinos to accept cryptocurrencies as an acceptable tender. What’s more, they went all in on the digital currency movement by not only accepting Bitcoin, as is the case with many online operators, but also some of the smaller, more alternative cryptocurrencies. The casino is unique thanks to the fact that it focuses exclusively on cryptocurrencies.

Most other operators choosing to go down the digital currency path accept more traditional forms of payment too. But accepting cryptocurrencies as well as currency-payments is accompanied by its own set of unique challenges, as regulators have been known to come down hard on operators not playing it 300% by the book.

Thanks to Evolution’s award-winning Live Dealer and Live Casino software, the crypto-operator was recently able to launch its “Blackjack on Thursdays” special promo offer. In order to participate, players have to sign up at 1xBit.com and then opt in on exclusive Bit Blackjack.

But slots fans are able to join in on the crypto-fun too, because it’s not only Live Dealer Blackjack that’s up for the play. 1xBit also features a variety of award winning slots from more than 100 top developers all over the world.